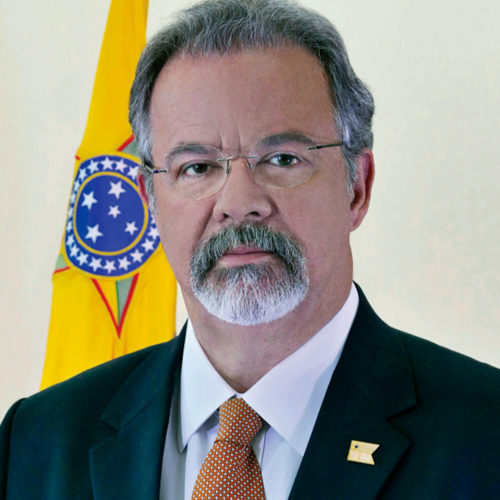 Born in Recife – Pernambuco in 1952, Raul Jungmann is the Minister of Defense of Brazil. Federal Deputy for two consecutive mandates (2003-2010), he chaired the Commission of Public Security and Fight against Organized Crime of the House of the Representatives (2008) and the Parliamentary Front for Arms Control, Peace and Life, which aims to promote the Disarmament Statute. Jungmann was Minister of Agrarian Reform (1999-2002) during Fernando Henrique Cardoso’s presidency, in which he accomplished, as a legacy, the largest agrarian reform in Brazil’s history. Moreover, he chaired the National Institute for the Environment (IBAMA) (1995-1996) and the National Institute for Agrarian Reform (1996-1999).

As Congressman, Jungmann acted as member of the Committees on Constitution, Justice and Citizenship (CCJC), as well as on Foreign Relations and National Defense (CREDN), besides the Foreign Monitoring Commission of the political crisis in Venezuela. In the CCJC, he was the rapporteur of the constitutional amendment on police reform and implementation of “Full Cycle Police”. He also performed as leader of the opposition in the Federal House of Representatives. Founding member of the PPS (Popular Socialist Party), created to succeed the former PCB (Brazilian Communist Party), he is presently vice-chairman of the State Directory of the Party in Pernambuco and member of the Party’s National Secretariat.

He started his political career after 25 years of opposition against the military dictatorship,

alongside the old Communist Party. In his youth, he worked as a consultant and chaired NGOs. Jungmann was also councilman of the municipality of Recife, Secretary of Planning at the State of Pernambuco (1990) and Executive Secretary of the Ministry of Planning during President Itamar Franco’s Administration (1993-4).

All Sessions by Raul Jungmann