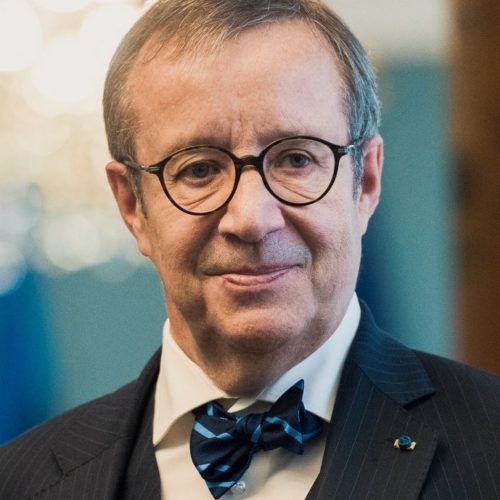 Toomas Hendrik Ilves served as President of Estonia from 2006 to 2016. In this post, he was key in driving the initiatives in e-government and cyber security for which the country has been acknowledged as a world-leader.

Educated in the United States, Ilves graduated from Columbia University in New York City in 1976 and received his Master’s degree in Psychology from the University of Pennsylvania in 1978.

In 1984 he moved to Europe, to work at the office of Radio Free Europe in Munich, Germany, first as a researcher and foreign policy analyst and later as the Head of the Estonian Desk.

From 1993 to 1996, Ilves served in Washington as the Ambassador of the Republic of Estonia to the United States of America and Canada. During this time he initiated with education minister Jaak Aaviksoo the Tiger Leap initiative to computerize and connect all Estonian schools online. From 1996 to 1998, he was Minister of Foreign Affairs. After a brief period as Chairman of the North Atlantic Institute in 1998, he was again appointed Minister of Foreign Affairs, serving until 2002.

Toomas Hendrik Ilves was elected President of the Republic of Estonia in 2006, and was re-elected for a second term in office in 2011. In June 2017 – President Ilves was awarded the Reinhard Mohn Prize entitled, “Smart Country: Connected. Intelligent. Digital.” In recognition, Brigitte Mohn, a Member of the Executive Board of Bertelsmann Stiftung, said “Toomas Hendrik Ilves introduced digitalization to schools and classrooms ten years before the invention of the smartphone. He realized just how important the early adoption and acquisition of digital skills were before many others did.”

During his presidency, Ilves was appointed to serve in several high positions in the field of ICT in the European Union. He served as Chairman of the EU Task Force on eHealth from 2011 to 2012. From 2012 to 2014, at the invitation of the European Commission, he was Chairman of the European Cloud Partnership Steering Board. From 2014 to 2015, he was the co-chair of the advisory panel of the World Bank’s World Development Report 2016 “Digital Dividends” and since June 2014, the chair of World Economic Forum’s Global Agenda Council on Cyber Security.

Since November 2016, Ilves has co-chaired The Global Futures Council on Blockchain Technology, a working group set up by the World Economic Forum focusing on how blockchain technology can be used to improve the security of the internet. His interest in computers started at an early age – he learned to program at the age of 13, and he has been promoting Estonia’s IT-development since the country restored its independence. During recent years, Ilves has spoken and written extensively on integration, trans-atlantic relations, e-government, cyber security and other related topics.

President Ilves has published many essays and articles in Estonian and English on numerous topics ranging from Estonian language, history and literature to global foreign and security policy and cyber security. His books include essay collections in Estonian, Finnish, Latvian Hungarian and Russian.

All Sessions by Toomas Hendrik Ilves